When the callback first presents to an agent, it will be in an Offered interaction state.

After accepting the callback, the interaction state will update to Dialing.  ECS will now begin dialing out to the requested callback number.

If a voicemail box is reached the interaction state will change to Handling.

Agents can modify the interaction completion status to either keep the callback in queue or remove it entirely.

Remove from queue (after leaving a voicemail):

When a callback is accepted and is still in the dialing process it can be cancelled by the agent by selecting the red “X” icon.

The completion status in this scenario will reflect Cancel by default.

If the callback is unanswered in the time indicated within the Duration For No Answer, it will have the same options as above except for “Cancel”. 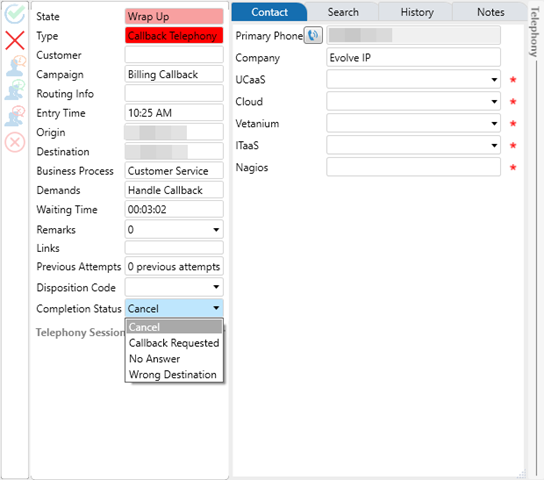 Within supervisor the following columns will provide more insight into your contact center callback.  Each metric below is provided at a Business Process level.

The recommended callback report is the 6.04 Completed Callback Interaction.  This report will display the following:

Attempt state of Aborted indicates the callback was removed from queue due to the configured callback schedule.  (This is configurable within supervisor: Item C Schedule)